You are here: Home / Social Media / Why Going Viral Should Not Be Your Goal on Social Media

A few days ago, I read the tragic story of a couple who were so obsessed with ‘going viral’ on YouTube.

This tragic story inspired me to write this post on why going viral should not be your goal on social media.

As mentioned in this article, according to psychological theory, content that feels novel or fills information gaps may trigger dopamine release in the brain. Further, content that touches the right emotions-excitement, surprise, nostalgia, etc.-can also latch onto a viral effect. The thought of your content going viral on social media is cool, but that is not the purpose of creating content.

So what should be your goal on social media? Before I answer that, let’s clarify what going viral means.

There is no need to risk your life or empty your bank account for the sake of creating great content. Do the best you can with what you have, where you are. Click To Tweet

What Does “Going Viral” Mean in Social Media?

On social media, any piece of content, i.e. any picture, quote, article, speech, song, video clip, game or news item that is funny, informative, clever, shocking or so surprising that people pass it on to all their friends immediately is said to ‘go viral’.

A viral post is something that has been shared, copied and spread across all social platforms. On Facebook in particular, going viral means that a post has generated a great deal of attention as a high number of likes, shares and comments.

Speaking of attention, what is an attention span? Are you familiar with that Microsoft study that stated that humans now have a shorter attention span than goldfish? There is an increasing demand for our attention. Aside from advertisements, television networks, family members, work duties, and cute animal videos, other people are always fighting for it.

Becoming ‘viral’ on the internet means that a piece of news, an image or a video has become incredibly popular in just a matter of hours or days by being shared by thousands (sometimes even millions) of people on social media.

Viral videos (in particular) are interruptive, just like the social media platforms they’re shared on. It’s not as if you go to YouTube or Google and look them up. You see them in your social media feed, fighting for your attention amid so much noise. It’s for this reason that short videos are so effective. You can easily justify taking 60 seconds to watch an inspirational story your friend just shared. However, the longer the video gets, the harder it becomes to justify to yourself why you aren’t concentrating on your work!

Many businesses want to “go viral.” And it’s no wonder. “Going viral” means that your content resonates so much that people talk about it all across the Internet. It’s often not a good long-term approach for many businesses.

Some brands are of the mistaken opinion that the goal of social media is to have their content ‘go viral’.

So now you know what it is all about, it is easy to see why you would want your content to achieve it. But should that be your goal?

It involves several factors in your chosen type of content to create a viral campaign, most of which are out of your control.

It’s the audience on each social media channel that decides whether your content is going viral. And what content will be a hit or a miss is out of your control. It lies only with your audience. And since each platform is unique, content that goes viral on one platform may not perform well on another.

Going viral is not a valid, sustainable, and replicable strategy. Most viral contents die off almost as fast as they rise. Think of Pokemon Go. It was a viral success, but today the craze for it has died down. But most of your content will never go viral. So if that’s your goal, then you’re going to be very miserable.

What Should Be Your Goal for Social Media?

Viral content on social media is not the norm. Rather, viral content is exceptional even for the very largest viral sites. In order to create a viral video or other types of content, you must first understand your target audience.

The purpose of creating content on social media is to drive the conversation around your brand. Your goal is to get a good ROI on building that piece of material.

In order to create great content, you must first understand your target audience. Your content is only effective if it speaks to people so convincingly that they feel compelled to share it.

A business owner should create at least one marketing persona before beginning a social media campaign. A persona is a representation of your target audience that includes information such as demographics, psychographics, and information on social media habits.

You can create a marketing persona by talking to current and potential customers to understand what is important to them as they consider making a purchase or sharing your content online. It will be a lot easier for you to create content that users are likely to share online with this information.

As mentioned earlier, every social media platform is different so the content you create will differ depending on the platform you choose. Before creating content, choose a platform on which to specialise. For many business owners, Facebook is an excellent platform on which to start a social media marketing campaign. It is imperative that you choose the platform based on information gained while developing your marketing persona.

It is important to time the release of content so that it will receive maximum visibility. You should determine the best time based on the habits and preferences of your target audience, as well as the social media platform you are using.

Since we already know that social media platforms use algorithms to rank content based on the probability of user engagement, this means we need to plan publishing content at just the right time. Therefore, publishing at the right time can positively affect the performance of your content.

Instead of focusing on creating viral content, focus on producing excellent content, i.e. content that will resonate with your target audience. Use your content to showcase your ability to help grow a community around your brand. And use your content to give your brand a human face and persona of its own.

If your content is original, insightful and helpful and you’re fortunate enough to have it go viral, that’s fine! If not, that’s fine too. Keep on creating quality content with consistency.

So don’t let your case be like that of the couple mentioned above who lost their lives while trying to create viral videos.

There is no need to risk your life or empty your bank account for the sake of creating great content. Do the best you can with what you have, where you are. 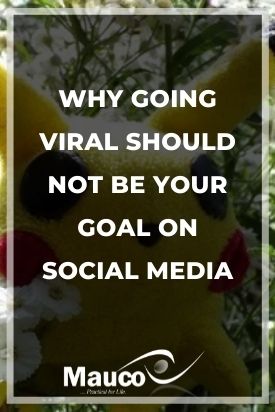 Ademola Abimbola is the founder of Mauco Enterprises. He is a digital marketer with over 12 years of experience. He provides site audits, phone consultations, digital marketing and social media marketing help. Follow him on LinkedIn and Twitter.