What does the emoji mean? Are they beneficial? Emoji are ideograms and smileys used in electronic messages and web pages.

The Unicode Consortium has created a new standard called Emojipedia, where you can see all the meanings behind the emojis.

Emojis are characters that represent facial expressions or emotions. They are part of the Unicode Standard, which the Unicode Consortium developed. There are currently over 3400 emojis available. There is hardly any social media platform or messaging platform (e.g. Facebook Messenger, WhatsApp, etc.) that does not enable the use of emoji in social media posts.

Emoji (singular emoji, plural emoji or emojis) have become an acceptable way of communication these days. Everyone uses them in tweets and chats on various platforms.

We use them daily, especially on social media, texting and chatting. Youths especially have become so creative in their use of emojis.

Some of the favourite emojis in use are:

Joining the growing list of animals represented on the emoji keyboard are beautifully designed characters for the kangaroo, peacock, parrot and lobster, with the addition of new food emoji for mango, lettuce, cupcake, moon cake and other popular items.

We can even say there is a global emoji craze with new emojis regularly added. Many characters across sports, symbols, superhero emoji, a softball, Nazar amulet, infinity symbol and many more are constantly being added.

Emojis have become so universal that July 17 has become known as World Emoji Day!

Emoji have become so universal that July 17 has become known as World Emoji Day! Click To Tweet

Here Are Some Fun Facts and Interesting Tidbits about World Emoji Day.

In conclusion, emojis are everywhere, so why not learn more about them today? Have questions about emojis? Feel free to ask us! Schedule a Call. 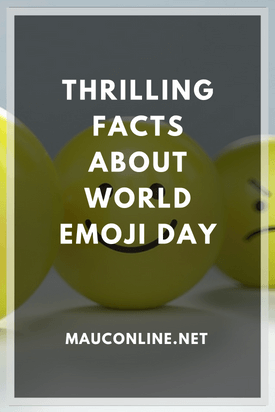 Ademola Abimbola is the founder of Mauco Enterprises. He is a digital marketer with over 18 years of experience. He provides site audits, phone consultations, digital marketing and social media marketing help. Follow him on LinkedIn and Twitter.